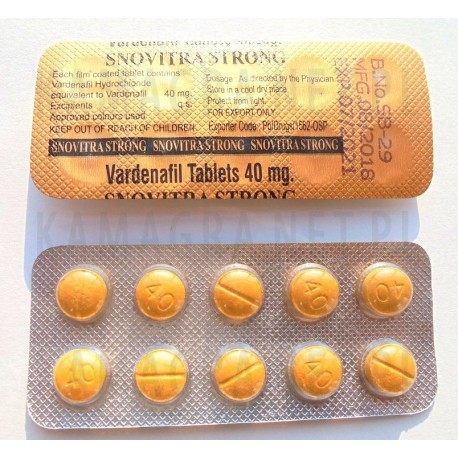 What is Snovitra strong 40mg?


A drug from the group of cGMP phosphodiesterase inhibitors used to treat erectile dysfunction.


What contains and how Snovitra strong 40mg works.


The active substance is vardenafil. It is used orally to improve erections in men with erectile dysfunction. Under natural conditions, i.e. sexual stimulation, vardenafil restores normal erection as a result of increased blood flow to the penis. Penile erection is a hemodynamic process. During sexual arousal, the release of nitric oxide occurs. This compound activates the enzyme guanylate cyclase, which leads to increased concentrations of cyclic guanosine monophosphate (cGMP) in the corpus cavernosum. This in turn causes relaxation of the smooth muscles allowing for a greater inflow of blood to the penis. The concentration of cGMP depends on the rate of its synthesis with the participation of guanyl cyclase and the rate of its breakdown by phosphodiesterase (PDE) hydrolyzing cGMP. Vardenafil strongly and selectively blocks phosphodiesterase (PDE5), specific for cGMP. Thus, it inhibits the breakdown of cGMP and increases its concentration on this path. Vardenafil significantly increases the effect of endogenous nitric oxide in the corpus cavernosum due to PDE5 inhibition. When nitric oxide is released as a result of sexual arousal, the inhibition of PDE5 by vardenafil results in increased cGMP concentrations in the corpus cavernosum. Sexual arousal is necessary for the beneficial effects of vardenafil.


Vardenafil causes a mild and transient decrease in blood pressure, which in most cases is not clinically relevant.


The product is absorbed quickly after oral administration, reaching a maximum concentration in blood after 30-120 minutes. It penetrates tissues, it is 95% bound to plasma proteins. It is excreted mainly in the form of metabolites, primarily with faeces (91-95% of the dose), in a small percentage of urine.


When to take Snovitra strong 40mg.


When not to use this preparation?


Unfortunately, even if there are indications to use the preparation, it can not always be used. You can not use the preparation if you are allergic (you are hypersensitive) to any of the ingredients.
Contraindications to the use of the preparation are also: parallel use of nitrates or donors of nitric oxide in any form, severe liver failure, end-stage renal disease requiring treatment with dialysis, hypotension (<90/50 mm Hg), recent stroke or heart attack, unstable angina thoracic, congenital retinal degenerative diseases (eg, pigmented retinopathy), the simultaneous use of potent CYP3A4 inhibitors (ritonavir, indinavir, and in men over 75 years of age also ketoconazole or itraconazole used orally).
Do not use the preparation in people who have lost their eyesight in one eye due to non-arteritic anterior ischemic optic neuropathy. It should not normally be used in people whose sexual activity is not recommended (eg unstable angina, severe heart failure).


Certain diseases and other circumstances may constitute a contraindication to use or indication to change the dosage of the preparation. In certain situations, it may be necessary to carry out specific check-ups.
Before making a decision about pharmacological treatment, the doctor should diagnose the erectile dysfunction and determine their causes. Before starting any treatment for erectile dysfunction, it is necessary to assess the condition of the cardiovascular system.
Co-administration of grapefruit or grapefruit juice may result in increased plasma concentrations; such a connection should be avoided.
Due to the lack of tests, it is not recommended to use the product in combination with other methods of treatment of erectile dysfunction.
Caution should be exercised when using the preparation in people with conditions predisposing to priapism (eg sickle cell disease, multiple myeloma, leukemia) or anatomical penile deformities (eg bending, corpus cavernosa fibrosis, Peyronie's disease).
In patients using α-blockers, the starting dose of the preparation should be 5 mg, and its administration may be started only after treatment with α-blockers. If the α-blocker used is tamsulosin or alfuzosin, vardenafil can be administered at any time; for other α-blockers, the interval between their administration and the use of the preparation should be maintained. In patients who already use vardenafil, the treatment with alpha-blockers should be started at the lowest recommended dose.