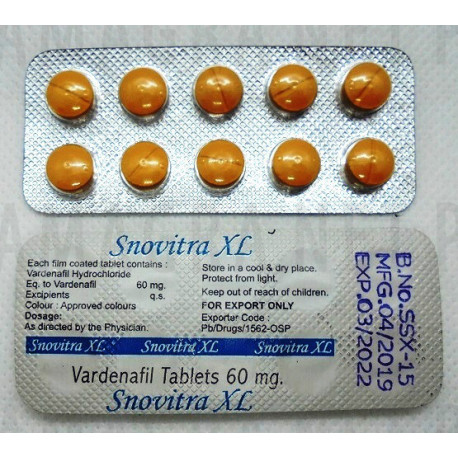 What is Snovitra XL 60mg?


A drug from the group of cGMP phosphodiesterase inhibitors used to treat erectile dysfunction.


What Snovitra XL 60mg contains and how it works.


The active substance is vardenafil. It is used orally to improve erections in men with erectile dysfunction. In natural conditions, i.e. with sexual arousal, vardenafil restores erectile function as a result of increased blood flow to the penis. Penile erection is a hemodynamic process. Nitric oxide is released during sexual arousal. This compound activates the enzyme guanyl cyclase, which leads to an increase in the concentration of cyclic guanosine monophosphate (cGMP) in the cavernous bodies. This in turn causes smooth muscle relaxation to allow more blood flow to the penis. The concentration of cGMP depends on the rate of its synthesis with the participation of guanyl cyclase and the rate of its breakdown by the hydrolyzing cGMP phosphodiesterase (PDE). Vardenafil strongly and selectively blocks phosphodiesterase 5 (PDE5), specific for cGMP. Therefore, it inhibits the breakdown of cGMP and increases its concentration in this way. Vardenafil significantly enhances the effects of endogenous nitric oxide on corpora cavernosa due to PDE5 inhibition. When nitric oxide is released as a result of sexual arousal, inhibition of PDE5 by vardenafil causes an increase in cGMP in the corpus cavernosum. Sexual arousal is necessary for beneficial therapeutic effects of vardenafil.


Vardenafil causes a mild and transient decrease in blood pressure, which in most cases is not clinically significant.


The preparation is quickly absorbed after oral administration, reaching a maximum concentration in the blood after 30-120 minutes. Penetrates into tissues, is 95% bound to plasma proteins. It is excreted mainly as metabolites, mainly in the faeces (91–95% of the dose), with a small proportion in the urine.


When to use Snovitra XL 60mg


When not to use this preparation?


Unfortunately, even if there are indications for use, it cannot always be used. You can not use the preparation if you are allergic (you are hypersensitive) to any of the ingredients.
Contraindication to the use of the preparation are also: parallel use of nitrates or nitric oxide donors in any form, severe liver failure, end-stage renal disease requiring dialysis treatment, hypotension (<90/50 mm Hg), recent stroke or myocardial infarction, unstable angina thoracic, congenital retinal degenerative diseases (e.g. retinitis pigmentosa), the parallel use of strong inhibitors of the CYP3A4 isoenzyme (ritonavir, indinavir, and in men over 75 also ketoconazole or itraconazole used orally).
It should not be used in people who have lost their eyesight in one eye due to non-arteritic anterior ischemic optic neuropathy. It should not normally be used in people whose sexual activity is inadvisable (e.g. unstable angina, severe heart failure).


Some diseases and other circumstances may constitute a contraindication to use or an indication to change the dosage of the preparation. In some situations it may be necessary to perform specific check-ups.
Before making a decision about pharmacological treatment, the doctor should diagnose erectile dysfunction and determine their causes. Before starting any treatment for erectile dysfunction, cardiovascular status must be assessed.
Simultaneous administration of the preparation with grapefruit or grapefruit juice may cause an increase in its plasma concentration; this combination should be avoided.
Due to the lack of research, it is not recommended to use the preparation in combination with other methods of treatment of erectile dysfunction.
Caution should be exercised when administering the product to patients with conditions predisposing to priapism (e.g. sickle cell disease, multiple myeloma, leukemia) or anatomical deformities of the penis (e.g. bending, cavernous fibrosis, Peyronie's disease).
In people who use alpha-blockers in parallel, the starting dose should be 5 mg, and treatment should only be started after α-blockers have been established. If the α-blocker used is tamsulosin or alfuzosin, vardenafil can be given at any time; for other α-blockers, there should be a gap between their administration and use. For people who are already taking vardenafil, treatment with alpha-blockers should be started at the lowest recommended dose.
Avoid using the product in people who have risk factors for QT prolongation, e.g. with hypokalaemia, congenital QT syndrome, concomitant use of class Ia antiarrhythmics (e.g. quinidine, procainamide) or class III (e.g. amiodarone, sotalol ).
If you experience sudden visual disturbance, stop using the medicine and consult your doctor.
The preparation does not exhibit anti-aggregation activity, however, in high concentrations (exceeding therapeutic concentrations) it intensifies the anti-aggregation effect of the nitric oxide donor - sodium nitroprusside.
There are no data on the safety of use of the preparation in people with coagulation disorders and in patients with active gastric ulcer; Your doctor will evaluate the benefit / risk ratio before using it.
It should not be used in people under 18 years of age.


The preparation is in the form of coated tablets or orodispersible tablets. It is intended for oral use. Do not exceed the recommended doses because it will not increase the effectiveness of the drug and may harm your health and life. If you have any doubts about the use of the preparation, consult a doctor.
Adults.
Film-coated tablets:
Taking this medicine during a high-fat meal may delay the onset of its effect. Usually 10 mg is used; depending on the effectiveness and tolerability of the drug, the dose may be increased to a maximum of 20 mg or reduced to 5 mg;
The preparation should not be used more often than once a day.
Table. which disintegrate in the mouth:
Usually 10 mg is used.


Can Snovitra XL 60mg be used during pregnancy and breastfeeding?


Do not use any medicine during pregnancy without consulting your doctor!
It is very important to consult a doctor before using any medicine during pregnancy (and also during breastfeeding) and to explain without doubt the potential risks and benefits of using the drug. If you are pregnant or plan to become pregnant please inform your prescriber for this medicine.
The preparation is not intended for use in women.
Can I use other preparations in parallel?
Tell your doctor about all medicines you have recently taken, including those obtained without a prescription.
Vardenafil is metabolised mainly in the liver by cytochrome P-450 enzymes - CYP3A4 isoform and to a lesser extent - CYP3A5 and CYP2C; therefore, inhibitors of these isoenzymes may increase its plasma concentration.


Do not use in parallel:


· With nitrates; vardenafil intensifies their hypotensive effect
· With HIV protease inhibitors such as ritonavir and indinavir (this is contraindicated)
· With ketoconazole or itraconazole; (this is contraindicated in men over 75 years of age.
Parallel use with strong CYP3A4 inhibitors (e.g. ritonavir, indinavir, itraconazole, orally administered ketoconazole) is not recommended, and to a lesser extent also erythromycin, clarithromycin and grapefruit juice; they may increase vardenafil plasma levels, enhancing its side effects; for erythromycin or clarithromycin, the dose of vardenafil must be reduced.

Side effects occur in only 2% of patients tested. Despite many side effects, Snovitra XL 60mg is still a safe product.

The drug should be stored out of the reach and sight of children.

The most suitable storage temperature is 15-25 ° C in a dark and dry place.

We guarantee unforgettable moments and intoxicating nights thanks to Snovitra XL 60mg tablets only from EU.KAMAGRA.NET.PL - Your reliable pharmacy.

I am from PL but I live in the UK, always on time and 100% satisfaction. I recommend to all EU buyers.