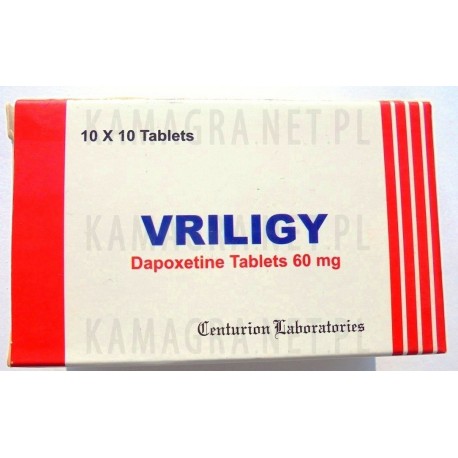 
What are the Vriligy 60 mg pills used for?

Vriligy 60 mg (dapoxetine 60 mg) is used to treat premature ejaculation (PE), which is one of the most common causes of sexual dysfunction in men. It is defined as an early ejaculation with minimal sexual stimulation before or soon after penetration and can cause stress and relationship problems. Vriligy is used to improve control of ejaculation and to extend the interval before ejaculation occurs during intercourse, for men with persistent or recurrent PE.


How do Vriligy 60 mg tablets work?

Vriligy 60 mg tablets contain dapoxetine 60 mg, a selective serotonin reuptake inhibitor (SSRI) that is specifically used for premature ejaculation (PE) because it has a rapid onset of action, with a maximum effect in 1-2 hours and a short half-life, which means that it is quickly removed from the body within 24 hours. Ejaculation is a reflex mediated by the sympathetic nervous system. When sexual stimulation reaches a certain threshold, sensory nerve cells in the spinal cord are activated and nerve impulses are sent to the brain, which then send messages back to motor neurons controlling penile muscles that shrink to trigger ejaculation.

It is believed that the ejaculatory reflex is mediated by serotonin, a specific brain chemical or neurotransmitter that is involved in the transmission of nerve signals, which allows brain cells to communicate.

It is believed that low levels of serotonin in certain areas of the brain are responsible for causing PE. Dapoxetin in Vriligy blocks the reuptake of serotonin from the synapse, which is the gap between nerve cells through which chemical messages from one nerve cell to another are transmitted. If the uptake of serotonin by the first (pre-synaptic) nerve cell is blocked, this means that more neurotransmitter is left to the receiving (post-synaptic) nerve cell, which allows nerve cells to communicate with each other for longer. This action of dapoxetine in Vriligy 60 helps to prolong the ability to maintain sexual activity without premature ejaculation and to maintain control over ejaculation for a long time.

How to take Vriligy 60mg?

Take 60 mg Vriligy tablets swallowed whole with a glass of water with or without food. You should take a Vriligy tablet 1-3 hours before your planned sexual activity.


What does Vriligy 60 mg pills contain?

Several medicines interact with Vriligy 60 mg tablets and should not be taken while taking Vriligy or only after discussions and instructions from your doctor:


Drugs that cause a serious reaction with Vriligy: monoamine oxidase inhibitors in depression, thioridazine in schizophrenia, warfarin anticoagulant increase the risk of bleeding, NSAIDs such as aspirin or ibuprofen John's Wort, antimigraine drugs such as sumatriptan, tramadol analgesic, antidepressants, antidepressants like paroxetine or citalopram, SNRI antidepressants such as venlafaxine, lithium for mood disorders,
Drugs that affect Vriligy: thioridazine to schizophrenia, antifungals such as ketoconazole, antibiotics such as erythromycin, HIV treatment such as ritonavir and atazanavir, calcium channel blockers such as diltiazem for hypertension

Vriligy 60mg should not be used by people with:

-in severe liver or kidney failure

- with narrowing of the aortic valve or its severe valvular valve

- with degenerative changes in the retina - using drugs releasing nitric oxide from the group of nitrates, e.g. nitroglycerin, mononitrate and isosorbid diazotate

-a feeling of a stuffy nose

- an action lasting over 4 hours


Side effects occur in only 2% of the patients examined. Despite many side effects, Vriligy 60mg is still a safe product.

The drug should be kept out of the reach and sight of children.

We guarantee unforgettable moments and intoxicating nights thanks to Vriligy 60mg tablets only from EU.KAMAGRA.NET.PL - Your reliable pharmacy.