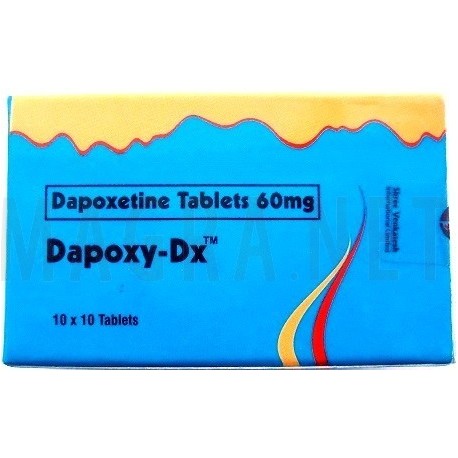 Dapoxy 60mg Indian reputable company Shree venkatesh LTD contains 60mg of the famous dapoxetine that works well to prolong and improve sexual intercourse, which aims to fight with premature ejaculation. This problem is found in 13% of the male population from 25 to 60 years old. So it is a problem well known nowadays and more and more people in this age and suffering from it. More and more often reputable pharmaceutical companies decide to fight this discreet and embarrassing problem. So they started to produce drugs for potencies based on Dapoxetine alone, in concentrations from 30mg up to as much as 90mg. One of the leading such drugs is introduced by us for sale Dapoxy 60mg.


Selective and powerful, very fast-acting serotonin reuptake inhibitor (SSRI). It also inhibits the reuptake of dopamine and norepinephrine. It is assumed that the mechanism of action of dapoxetine in the treatment of premature ejaculation is associated with inhibition of neuronal reuptake of serotonin with its subsequent effects on the pre- and postsynaptic receptors of the sympathetic system. After its administration, the drug is absorbed quickly, it is 30min-2h. Total bioavailability is 43% (range 16-75%). The drug is characterized by a linear pharmacokinetics in the 30-90 mg dose range. When multiple consecutive doses are used, the AUC of dapoxetine and its metabolite demethyldapoxetine (DED) increase by approximately 50% compared to the AUC values ​​after the first dose. High-fat food reduces c max dapoxetine by 10%, increases its AUC by 12% and slightly increases t max, but this is not clinically significant. Dapoxetine is 98% bound to plasma proteins and 97.5% DED. The drug is metabolized in the kidneys and liver, mainly with the participation of CYP2D6, CYP3A4 and flavin monoxygenase (FMO1). After administration, the drug undergoes the first-pass effect and is extensively metabolised to many derivatives, mainly by N-oxidation, N-demethylation, glucuronidation, hydroxylation, and sulphation. Dapoxetine in its unchanged form and in the form of an inactive N-oxide are major substances circulating in the plasma. There are also DED and didemethyldapoxetine in plasma. The effect of DED is comparable to the effect of dapoxetine, and the potency of this metabolite corresponds to 55% of the activity of the parent drug. The AUC and c max values ​​of the unbound DED fraction account for 51% and 24% of these values, respectively, for the unbound amount of dapoxetine. Dapoxetine metabolites are mainly excreted in the urine. Lack of unchanged drug in the urine. The initial t 1/2 dapoxetine is about 1.5 hours and the final one is 19 hours. The AUC value in people with severe renal impairment is good. Two times greater than in people with normal kidney function. In subjects with mild hepatic impairment, C max of unbound dapoxetine increases by 29% and AUC does not change. C max and AUC of unbound active fraction (sum of exposure to unbound dapoxetine and DED) are reduced by 31% and 6%, respectively. For moderate hepatic impairment, the C max of unbound dapoxetine does not substantially change, whereas the AUC increases by 67% C max of the active fraction is essentially unchanged and its AUC increases two-fold. The concentration of dapoxetine and DED in plasma in subjects metabolically metabolised by CYP2D6 is higher than in those metabolising rapidly.


The tablets should be taken whole regardless of meals. Initially, 60 mg on day 1-3 h before planned sexual activity, depending on the body's response to the drug and its tolerance, the dose can be increased up to 90 mg once daily, if the patient experienced orthostatic reactions after the first dose - do not increase. The drug is not intended for everyday use, not to be taken more than once a day. After 4 weeks of treatment or after administering at least 12 doses, assess the relationship and benefits of treatment to the risks associated with it. Data on the efficacy and safety of the drug for 24 weeks are limited. Maximum caution is recommended in subjects with mild renal impairment, as well as in subjects with metabolic CYP2D6 metabolism during dose escalation to 90 mg and in patients treated with CYP2D6 inhibitors.

Dapoxy 60 mg should not be used by people with:

- Redness on the face with a feeling of warmth

- Deficiency of the body and fainting

- Pain in the limbs (upper and lower)

Side effects occur in only 2% of the patients examined. Despite many side effects, Dapoxy 60 is still a safe product.

We guarantee unforgettable moments and intoxicating nights thanks to Dapoxy 60 tablets only from EU.KAMAGRA.NET.PL - Your reliable pharmacy.


Shree Venkatesh International Limited is an ISO9001: 2008 certified company registered in accordance with the Companies Register Act, dealing with all types of export of generic medicines, pharmaceutical preparations and bulk medicines from India based in Gujarat, which is also known as a production center for pharmaceutical preparations in India .

The company also offers contract manufacturing services for foreign buyers for the production of tablets, capsules, injections, syrups, etc. In facilities certified by the WHO-GMP, as well as acts as addictive agents for the delivery of various medicines in bulk and API, as required by foreign buyers.

The company also operates on behalf of several British companies in the field of contract manufacturing in facilities approved by MHRA.
They carry out orders for medicines for online pharmacies in all of the above-mentioned products.

Fast shipping and I got pills after 2 days .