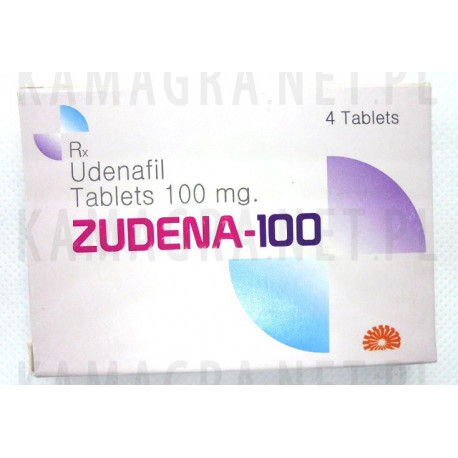 Udenafil is a new ingredient in potency drugs for men.

Zudena is the latest addition to the class of oral drugs used for erectile dysfunction, which is a valuable complement to tablets of recognized and widely recognized brands such as Viagra, Cialis, Levitra, and recently Stendra (or Spedra). Udenafil, the active substance of Zudena, was originally developed by the Korean pharmaceutical company Dong-A Pharmaceutical Co., Ltd in 2011 and has since been approved for use in the country of origin. Patient years of safe and fruitful use, as well as numerous clinical studies, give grounds to conclude that Zudena is an important contribution to the world of male sexual health pharmaceuticals because it has a unique pharmacokinetic profile that combines the benefits of two flagship drugs in ED therapy, Viagra ( sildenafil) and Cialis (tadalafil).

-shorter start time than Cialis
-longer duration than Viagra, Levitra and Stendra
-effectiveness in daily therapy
-increased clinical tolerance during daily use compared to other drugs
-milder side effects


What is udenafil - mechanism of action

The active substance in Zudena is udenafil, a formulation developed and approved for use in patients with erectile dysfunction in Korea in 2011. Udenafil belongs to the same class of phosphodiesterase type 5 inhibitors as sildenafil (Viagra) and other medicines in this group, but it differs from them in terms of its beginning and duration of the action, as well as the PDE selectivity factor. These pharmacokinetic properties make udenafil a unique substance with strong competitive properties compared to any other ED drug. In order for udenafil to be approved for international use, studies are required in various ethnic groups, but the data available today and the safety of its use in the country of origin within 8 years give grounds to believe that it is only a matter of time before the substance obtains FDA approval.
Dosage of Zuden

The dose of Zudena depends on the dosage regimen chosen: whether it is given as a solution on demand or once a day. During the studies, the efficacy and safety of udenafil as a daily therapeutic agent was established for the 25 mg, 50 mg and 75 mg doses during the 12-week study. Thanks to this, Zudena can be seen as a beneficial alternative to Cialis Daily taken at a dose of 2.5 mg or 5 mg, because due to the higher selectivity profile PDE11 Zudena is better tolerated than tadalafil by a certain group of patients with increased sensitivity to inhibiting the phosphodiesterase subtype.

Based on the clinical effectiveness and tolerance established by the physician, patients are prescribed the following doses of Zudena: 25 mg, 50 mg, 75 mg, 100 mg, 200 mg and 300 mg. The lower dose limit showed relatively poor on-demand efficacy in placebo-controlled studies, while doses starting with udenafil 100 mg and 200 mg gave 88.8% and 92.4%, respectively. Controversially, doses in the lower range (udenafil 25-75 mg) have been shown to be effective in daily dosing regimens.

The dose of Zudena should be determined by the attending physician who is well informed about the patient's clinical history and current state of health. The dose is determined based on the severity of erectile dysfunction, individual response to udenafil, and the patient's tolerance of sexual habits and personal preferences, overall health and the presence of concomitant illnesses, and some other factors determined by the physician. Under no circumstances should you replace the maximum dose recommended by your doctor. In the event of an overdose, please inform your doctor immediately and ask for further instructions.
Zuden directions

Adults take 100 mg once a day, about 30 minutes to 12 hours before expected sexual activity. The maximum recommended dose is once a day. After confirmation of an adverse reaction to 100 mg, an increase to 200 mg should be carefully considered. This medicine can be taken with or without food.